My classmates and I only total to around 20 people that need to touch the depot, but everyone’s distaste towards merging anything (even scripts, text files, you name it) and its inability to gracefully deal with large binaries pushed us away from Git and towards more centralized solutions like Apache SVN and Perforce. Apache SVN is completely free, but we opted to try out Perforce since they released P4Connect to let Unity Free users integrate Perforce with the editor. Perforce integration, which requires Unity Pro + Team License to enable. Integration isn’t entirely necessary since we managed without it when we used Git, but I liked the integration I had when working with UE4, so I put up Perforce as a potential alternative.

We found the control over file types and paths to be incredibly useful, giving us the ability to restrict team members from accidentally making edits to the same scene or breaking prefabs between merges by limiting changes to a single user at any given time. It’s not an entirely automated process though. 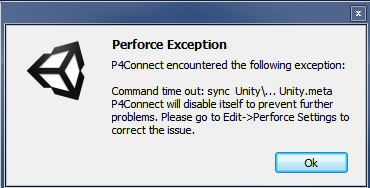 Perforce seems to be the VCS we’ll be using when we begin our final project before graduation. Hopefully the difficulty in adjusting to Perforce from Git will be a smaller pain than having to deal with any troubles that come from sym-linking in our manually versioned art assets in Dropbox and our code in a Git repository.